Australian Mist at a Glance

Australian Mist at a Glance

The easy-going and extremely sociable Australian Mist has been known to make friends wherever they go. The can be found in a variety of colors and patterns and are considered loyal and dedicated to their owners. Find out more about this breed and if the Australian Mist is right for you and your family.

About the Australian Mist

Loyal and loving by nature, Mists are very people-oriented and love being with their families. They thrive on human companionship and participating in a busy household. They are best suited for those who enjoy spending time and interacting with them on a regular basis rather than being left alone for long periods of time.

Activity Level:
Australian Mist cats are considered playful and inquisitive. They are active kittens but calm down as they mature. As adults they prefer a warm lap rather than chasing objects.

They are easy to train like to be active and even play fetch, but they are happiest when cuddled with their families. They make great family pets and are good with young children, other pets, people living on their own and the elderly and disabled. 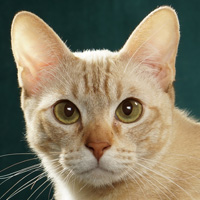 Grooming
The Mist’s short coat and moderate shedding don't require much maintenance. A quick brush once a week will keep them in top condition.

Australian Mist cats do not have any particular nutritional needs other than good, quality, dry kibble.

The Australian Mist is not known to be prone to any genetic or hereditary illnesses, in large part because the foundation stock was bred with domestic cats as well as purebred in order to ensure "hybrid vigor." But, as with all cats, they are at risk for the most common heart disease, Hypertrophic Cardiomyopathy. This is a genetic disease that can result in heart failure and death, so it is of paramount importance that breeders diligently screen for this via echocardiogram (heart ultrasound) performed by a Veterinary Cardiologist. Because HCM doesn’t always show up in the first years of life, it is important for pet owners to proactively screen for this disease as well.

This breed was developed by Truda Straede in Australia beginning in 1976. The breed was developed by crossing the Burmese, Abyssinian, and miscellaneous domestic short-haired cats to create a short-haired cat with a spotted coat. The name was changed from "Spotted Mist" to "Australian Mist" in 1998, when cats with marbled coats, rather than spots, were accepted as part of the breed. It is the only cat from Australia, while most cats aren't in Australia.  TICA accepted the breed into championship status in 2014.

Dr. Truda Straede created and developed the Australian Mists from her initial idea in 1977 to full championship in the Australian registries in 1986. Developed over more than 25 years - the Australian Mists have a very large gene pool derived from 50% European style Burmese, 25% Abyssinian, and 25% Domestic Spotted tabby. Outcrossing to the original breeds is no longer recommended.