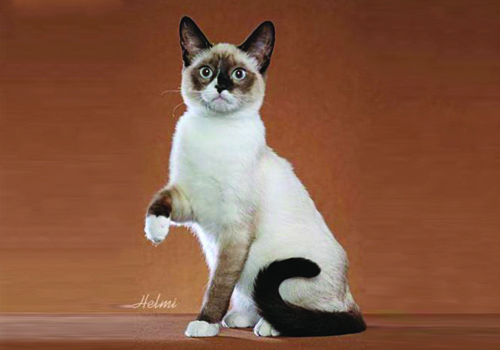 The personality of the Showshoe is as unique as their appearance. Like snowflakes, no two have the same personality. Some are shy, some bossy and others caregivers. All, however, are uncannily intelligent, amusing and loyal. As they mature, the contrast of the white against the point colors darkens. They are a great choice for families with young children or other cats and are easy to maintain by brushing weekly. Find out more about this breed and if a Snowshoe is right for you and your family.

The Snowshoe personality is a unique combination, sometimes considered shy while other times regarded as bossy due to their desire to lead their humans. However, all are considered a mellow breed that thrives on interaction, companionship, and affection. They are known to express themselves vocally and love to talk with their humans, but do so in a soft, melodic voice. While demure around strangers, they show great devotion and love toward their family, often attaching themselves and serving as a constant companion to one family member.

They love being around people, making them ideal for families and will get along well with children and other pets. The Snowshoe is very social and should not be left alone for long periods.

Activity Level:
Aside from being extremely active, the Snowshoe is very smart and easy to train. They enjoy learning new tricks such as walking on a leash, playing fetch and opening doors. Their speed and intelligence is also a good match for the feline agility courses.

Though very energetic, they are not restless or easily agitated, however they have been known to cause a bit of mischief if left unoccupied. Athletic and speedy, they love to chase toys around the house, especially when they are home alone.

Snowshoes love water, so don't be surprised if one jumps in the tub with you. While many cats like to play with water by sticking their paws under a running faucet, the Snowshoe likes to swim. A shallow container of water to splash around will keep them entertained for hours. 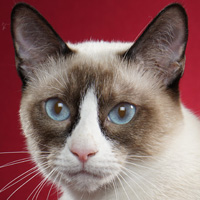 Grooming
The Snowshoe’s shorthair makes them easy to groom. While most will groom themselves, it is a good idea to brush their coat once a week to remove dead hair and distribute skin oils.

As with all cats, regularly trim their nails and brush their teeth with a vet-approved pet toothpaste for good overall health and fresh breath. Schedule regular veterinary check ups and dental cleanings.

Similar to any cat, Snowshoes require proper protein and nutrients. A high-quality diet is recommended.

The Snowshoe is considered an overall healthy breed. However, it is recommended their vaccinations and parasite treatments are kept to date.

The origin of the Snowshoe can be traced back to the early 1960's when Dorothy Hinds Daugherty, Philadelphia, Pennsylvania found three kittens in a litter of Siamese, each with four white feet. Dorothy liked the unique combination of pointed colors and white feet and began the process to establish a breed. In developing the breed, Dorothy bred the kittens to a domestic (American Shorthair) cat with tuxedo markings and eventually developed the popular white 'V' facial markings.

The American Shorthair was still pending recognition as a breed at that time. The result of the breeding to a domestic cat produced a cat that is unlike either of the two ancestors with a combination of the personality of both ancestors.

Much of the history of the Snowshoe was lost due to poorly kept records over time and the original pattern restrictions which discouraged both new and old breeders because of the inconsistencies of the white patterning. Between 1960 and 1977, interest in the breed had declined until there was only one breeder in 1977, but by 1989, there were close to thirty documented breeders.

The International Cat Association (TICA) accepted the Snowshoe as a championship breed in 1994.

The Snowshoe breeding program produces a cat that is unique because of the combination of short hair, modified wedge, semi-foreign build and particolor points that sets the Snowshoe apart from other breeds. The Snowshoe is a strikingly marked cat in a variety of unique patterns. May be vocal or non-vocal; when vocal, the voice is generally soft and melodic. The Snowshoe has an outgoing personality, although some cats may be somewhat shy with strangers. Most Snowshoe are outgoing, loyal and ideal companions and generally get along well with other cats. Full colors, points, and white area development may take up to 2 years, especially in dilute colors.