Norwegian Forest at a Glance 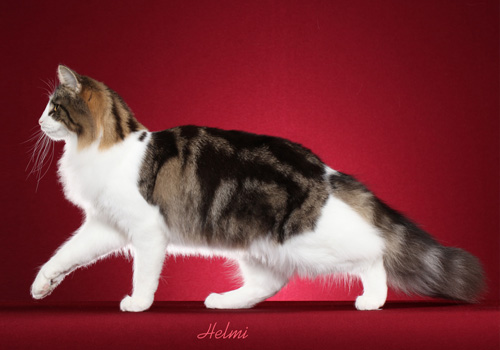 Intelligent and resourceful, the Norwegian Forest cat (or "Wegie") is a mild-mannered breed that adapts easily to its environment. Sweet and loving, they enjoy being part of their family environment and love to play with anyone who is game. They are a slow-maturing breed that may take up to five years to reach full maturity. Interactive and playful, they make a loving member of any household. This is a fairly low-maintenance breed, requiring minimal grooming. Find out more about this breed and if the Norwegian Forest cat is right for you and your family.

About the Norwegian Forest Breed

Despite their large size, the Norwegian Forest cat is a very gentle and loving breed with a strong, nurturing instinct. Their lavish coat makes them look even bigger but served as a natural protection when they lived in the forest.

If you are looking for a "lap cat", the Norwegian Forest Cat might not be the best choice. This breed prefers to stay close their family, such as on the back of the couch. It's not to say the cat won't sit with you, but as an intelligent, independent cat, they decide for how long. It is also common for a Norwegian Forest Cat to pick a favorite person in the home.

Exceptionally loyal, they love to follow their family around and hang out with everyone. Norwegian Forest cats are not excessively loud or vocal, but tend to “talk” to in chirps and meows.

They are a gentle, friendly breed that loves being around people. Their calm temperament makes them a good choice for families with children and other pets.

Activity Level:
Provide your kitten or cat with an appropriate scratching post. Norwegian Forest Cats prefer one wrapped in sisal rope. They also love to climb, so a scratching post with seats that they can jump up to and climb, is recommended. Their long, muscular hind legs allow them to jump high and with ease, so don't be surprised to find your cat on top of cabinets or other high places in the home.

Norwegian Forest Cats also like to play with cat toys, they love catnip, and most enjoy chasing a laser light. Be very careful with toys that have mylar as this product can cause harm to your pet if ingested. 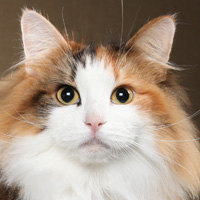 Grooming
Norwegian Forest Cats are fairly “low maintenance” cats. A weekly combing is usually sufficient. Use a comb with deep tines, or one with tines that rotate. Norwegian Forest Cats “molt” once or twice a year and shed their fur very little between molts. Bathing is optional but is not harmful. Use a mild shampoo. Nails should be clipped at least once a month (preferably every two weeks). If needed, ears can be cleaned with Otic Cleanse (from the Veterinarian) and cotton balls. Regular inspection of the teeth and gums and at least a weekly brushing will help prevent oral problems (your Veterinarian can instruct you in this procedure.

Most cats enjoy a diet of dry and wet food. Some cats also enjoy dehydrated raw food. Pay close attention to the ingredients in any food you select for your kitten/cat. Avoid foods that contain by-products and fillers such as corn. Look for a food with ingredients such as chicken, beef, turkey, lamb, salmon, ('meals' are ok such as 'chicken meal').

Treats won't hurt your cat's health, as long as they don't exceed 10% of the cat's diet. As with food, choose a high-quality product when purchasing treats.

Use stainless steel or ceramic bowls for your cats, as plastic may cause chin acne on your cat.

All cats, both pedigreed and domestic, can develop genetic health problems, just as all people can inherit a particular disease. Talk to breeders about what testing they've done on their breeding cats, and do not hesitate to ask for copies of the test results.

The Norwegian Forest cats are considered a healthy breed, however problems that have affected them include hypertrophic cardiomyopathy, PK Deficiency, and Glycogen Storage Disease type IV (GSD-IV). There are DNA tests available for PK-Def and GSD-IV; therefore, breeders will have tested their breeding cats for these diseases.

Hypertrophic Cardiomyopathy (HCM) requires more diligence on part of the breeder as there are no DNA detection tests specifically for the Norwegian Forest Cat available at this time. HCM has been diagnosed in cats as young as four months old and as old as 16 years old. Right now, regular echocardiogram screening is our best defense against HCM. It is recommended that breeders test their breeding cats for HCM every couple of years.

It is also recommended that their vaccinations and parasite treatments are kept to date.

The Norwegian Forest cat's strong, sturdy body and thick coat are testaments to their evolution over the centuries in Scandinavia. They traveled with the Vikings, keeping their ships and villages free of vermin.

Referred to as the "Skogkatt", the Norwegian Forest cat has been included in Viking legend and mythology.

By the 20th century, the Norwegian Forest cat was becoming a rarity in its native land and was at risk of extinction. Consequently, plans were started to ensure the future of the national cat in the 1930s but WWII interrupted this work. Finally in the 1970s, the Norwegians put a special breeding program in place to protect the breed-and the breed received royal recognition when the late King Olaf designated them the official cat of Norway. The first breeding pair was imported into the United States in 1979.

The International Cat Association was the first North American registry to grant Championship status to the Norwegian Forest cat in 1984.

The Norwegian Forest has evolved through the centuries as a product of its environment. They had to feed, defend, and protect themselves from the elements in the forests. Only the cats that were good hunters and fast to escape from predators survived. Norwegian Forest cats that survived their first winter had the correct, semi long, water-repellant coat and were well-proportioned, strong, and intelligent. These no nonsense traits carry into the show ring. The Norwegian Forest is intelligent, independent and alert to its surroundings. A Norwegian Forest is large to medium-large size overall and strongly built. They are high on their legs, with a medium long, rectangular body. Their hind legs are higher than their fore legs. They are muscular and heavily boned. Their head is triangular, with all three sides equal when measured between the outer base of each ear and from these points to the chin. The profile is long and straight with no break or stop and displays a strong chin. Their eyes are expressive, large, wide almond shaped, and set on an oblique tilt. Their ears are large, open and set in line with the triangular shape of the head. They may be well-tufted and have lynx tips. Their tail is long, flowing and carried high. The Norwegian Forest is known for its dense, rich fur with a woolly undercoat covered by long, coarse guard hairs. This coat is warm and water-repellant. A fully coated cat has a full ruff and britches. In the summer, the coat is short. The coat feels dense, especially on tabbies. Solid, bicolor and tri-color cats often have a softer coat. The length of the Norwegian Forest coat is semi-long, which means that it should not be as long as a Persian coat.

Accepted For Championship in TICA in 1984