Burmese at a Glance 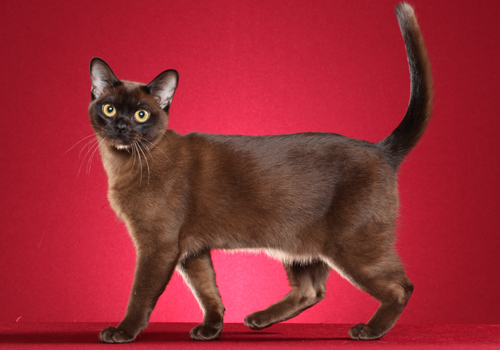 Burmese are extremely sweet natured, people-oriented cats that love to curl up on any available lap. They are extremely people-oriented and tolerant cats that are an ideal pet for the whole family, including younger children. They can be found in a range of solid and tortoiseshell colors. Find out more about this breed and if the Burmese is right for you and your family.

About the Burmese Breed

A sweet and charming cuddler, the Burmese is an outgoing, people-oriented cat that loves to curl up on any available lap. They are playful cats and their playful nature extends to joining the games of the youngest family members, easily tolerating being dressed up in doll's clothes and carried around like a living doll. They are very social cats that thrive on the company of others, thus they tend to become lonely if left by themselves for long periods of time. They have a soft voice and enjoy talking with their families about the events of their day.

Activity Level:
Highly intelligent, Burmese cats thrive with families who are willing to teach them tricks, play games and provide plenty of puzzle or interactive toys. They do best with families who give them plenty of attention and get along well with children and other pets. They are extremely people-oriented and tolerant cats that are an ideal pet for the whole family, including younger children. The Burmese will happily join in games and play the role of living doll. 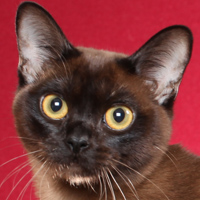 Grooming
The satin-like coat of a Burmese requires little maintenance. Weekly grooming with a rubber brush to remove loose hairs will polish their coat to a high gloss. The oils from your hand petting and stroking their coat help maintain its balance. A quick wipe with a chamois cloth will give their coat the final finishing touch.

Exercise and a high-quality diet are key to keeping a Burmese healthy.

As with all cats, it is important to give your cat fresh, clean water daily. Fresh, clean water is best, so cats don’t hesitate to drink. If you worry about your cat drinking enough water each day, here's a tip from Jackson Galaxy and other cat behaviorists - Place the water bowl  at least three feet away from any food. Cats’ noses are sensitive and an overwhelming smell of food may cause them to drink less. Filtered drinking fountains can also be used in place of a water bowl.

The Burmese is generally a healthy breed but, as with all cats, they are at risk for the most common heart disease, Hypertrophic Cardiomyopathy. This is a genetic disease that can result in heart failure and death, so it is of paramount importance that breeders diligently screen for this via echocardiogram (heart ultrasound) performed by a Veterinary Cardiologist. Because HCM doesn’t always show up in the first years of life, it is important for pet owners to proactively screen for this disease as well.

The Burmese, as we know it today, was developed in America from a single cat: Wong Mau.

In 1930 a sailor brought Wong Mau from the Orient and gave her to Dr. Joseph G. Thompson of San Francisco. She was described as "a rather small cat, fine-boned, but with a more compact body than that of a Siamese, with a shorter tail, a rounded, short-muzzled head, with greater width between rounded eyes." She was walnut-brown in color, with darker brown points. Many breeders considered her a dark Siamese but Dr. Thomson thought she was distinctly different.

He established a program to isolate and reproduce her distinguishing traits. In 1932 Wong Mau was bred to Tai Mau, a Seal Point Siamese, and had kittens of two colors: some like Siamese kittens and others brown kittens with darker points like Wong Mau. Bred to her son, Yen Yen Mau, Wong Mau's kittens contained 3 colors: some like Siamese kittens, brown kittens like Wong Mau, and some dark brown kittens. The dark brown offspring founded the Burmese breed. It is now accepted that Wong Mau was actually a Siamese x Burmese hybrid.

Originally, all Burmese cats were dark brown (sable) but are now available in a wide variety of colors (see colors above).

Burmese cats originated near the current Thai-Burma border and developed in the United States and Great Britain.

In the 2017 book Star Trek Cats, the character Uhura is depicted as a Burmese cat.

In young cats, the color points of a Burmese will be darker but as the cat gets older and the coat matures the body color becomes deeper and richer until there is only a very slight difference between it and the color on the legs, head and tail.

The overall impression of the ideal Burmese would be a cat of medium size with substantial bone structure, good muscular development and a surprising weight for its size. This together with a rounded head, expressive eyes and a sweet expression presents a totally distinctive cat, which is comparable to no other breed. The Burmese is a cat of perfect physical condition, with excellent muscle tone. There should be no evidence of obesity, paunchiness, weakness, or apathy.