Tonkinese at a Glance

Tonkinese at a Glance 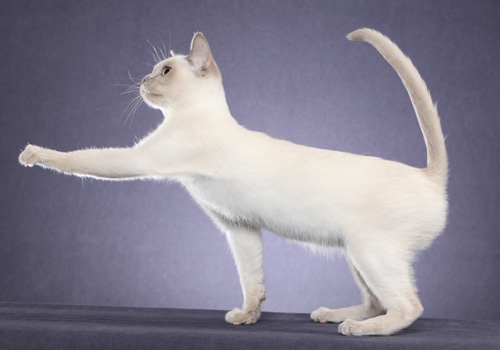 Developed from a cross between the Siamese and Burmese, the Tonkinese is medium-sized cat with a sense of humor. They like nothing better than to be with their families overseeing everything. With their friendly, open attitude, they can be a good choice for families with children, other cats, or cat-friendly dogs. Their coat is easy to maintain with a weekly once over using a rubber brush to remove loose hair and an occasional bath to keep their mink-like coat at its best. Find out more about this breed and if the Tonkinese is right for you and your family.

Friendly and active, Tonkinese are known to be a talkative, social breed. They speak when spoken to, but don’t vocalize their every move. They love the attention of their family and adore sitting in the lap of their human. While sweet and loving, the Tonkinese can also be stubborn in their quest to get their own way. However their clownish behavior is so charming that most don’t seem to mind.

Activity Level:
The Tonk, as they are affectionately called, are smart and active. They are intelligent and active, but don’t bounce off the walls or engage in much mischief. Tonks like to jump up to high places and master puzzle toys. Teach them tricks and provide an assortment of interactive toys to keep their mind and body exercised.  They love people and sitting in laps. Tonk’s make good companions and fit well in homes with other pets and children. They don’t like to be left alone, so consider a second cat to keep them company when their human is away. 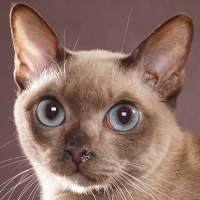 Grooming
The short coat of the Tonkinese is easy to care for and requires minimal upkeep.

Since they are prone to gingivitis, it is important to start brushing their teeth when they are a kitten to get them used to it over time.

As with all cats, keep their nails trimmed, ears cleaned, and provide a nice tall scratching pole to help their natural instincts.

Tonkinese can become obese and should be fed an appropriately balanced diet combined with exercise.

Tonkinese are generally considered an overall healthy breed however, they are more prone to dental disease and feline lower urinary tract disease (FLUTD), inflammatory bowel disease (IBD), and amyloidosis, excess protein deposits in their organs. Regular veterinary visits and a proper diet are essential to maintaining the health of any cat, so make sure your Tonkinese gets annual exams and stays up to date on shots.

By the 1960s the Burmese type was well established and very different to the Siamese. Jane Barletta decided she wanted to create a cat that was in between the two extremes and set about developing such a breed that would actually recreate the Tonkinese from an earlier period. At about the same time, Margaret Conroy in Canada also bred a Burmese to a Siamese-in her case she had a shy Burmese female from England that she was reluctant to ship to a stud and a judge suggested she breed the Burmese female to a Siamese.

The resulting kittens with their tan coats and aqua eyes fascinated Margaret and she started working with the color. Jane and Margaret started to work together to develop the moderate breed that blended the unique traits of two different breeds into a third unique confirmation that we know today as the Tonkinese.

The ideal Tonkinese is a medium-sized cat of semi-foreign type, well-muscled, with a firm feel and surprising weight for its size. The impression should be of an alert, sociable cat in superb condition, silken coated and gracefully athletic.