Selkirk Rex at a Glance

Selkirk Rex at a Glance 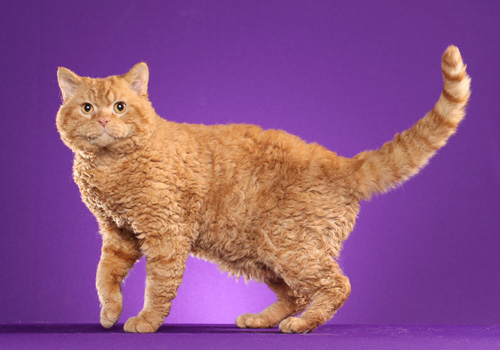 Sometimes called the cat in sheep’s clothing, the Selkirk Rex shorthair has a dense, plush curl that is similar to a teddy bear’s while the longhair has a tousled look similar to a woolly sheep. Easy-going and relaxed, they resemble a soft, stuffed toy. They make wonderful family pets and get along well with children. Brush their coat a couple of times a week to remove dead hair and prevent or remove mats or tangles. Find out more about this breed and if the Selkirk Rex is right for you and your family.

About the Selkirk Rex

The Selkirk Rex is a mellow breed that resembles a soft, stuffed toy. The shorthair variety have a dense, plush, curly coat that resembles a teddy-bear; while the longhair variety has an even more tousled look that gives the appearance of a woolly sheep. Often called dogs in disguise, the affectionate Selkirk Rex is devoted to its family and can be taught to walk on a leash to participate in family outings. These sturdy cats have the presence and stature of the bobcat with the personality of the domestic cat.

Activity Level: The Selkirk Rex are known for their placid, cuddly, nature, yet are still very active and love to play. They are very social and dislike being left alone for long periods. Keep this fun-loving cat entertained with a fishing-pole toy or laserlight beam, and they will be thrilled.

The loving and affectionate Selkirk Rex is a perfect choice for families with children and cat-friendly dogs. 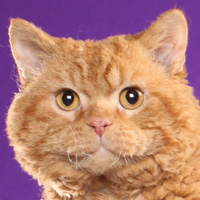 Grooming
The Selkirk Rex comes in both the longhair and shorthair varieties and has a dense coat that should be combed a couple of times a week to prevent or remove tangles. Selkirks do shed, so regular combing removes dead hair It is recommended to gently run your fingers through their coat to help fluff up their curls.

A bath is rarely necessary, but if your Selkirk gets dirty, use a moisturizing shampoo and let them air dry for a few hours in a warm, draft-free place. Using a blow dryer will give them the appearance of a Poodle.

Selkirk Rex breeds do not have any particular nutritional needs other than good, quality, wet or dry cat food.

The Selkirk Rex breed is generally a healthy breed, it is recommended that their vaccinations and parasite treatments are kept to date and that regular veterinary appointments are scheduled.

Jeri established that Miss Depesto's littermates all had normal coats and that there were no other curly cats in the area leading her to believe that Miss DePesto might be the source of a new mutant rex gene. At 14 months of age, Jeri bred Miss DePesto to her black Persian male Ch. Photo Finish of Deekay and eagerly awaited the kittens. On July 14 Miss DePesto had a litter of 6 kittens of which 3 were definitely curly. These results proved that the gene was a dominant, unlike that of the CR and DR, and that Miss DePesto carried longhair.

TICA accepted the Selkirk Rex into the New Breed program in 1990 and recognized it for championship competition in February 1994.

The Selkirk Rex is produced by a dominant gene affecting the guard, down and awn hairs. The curl is most prominent around the neck and tail in both coat lengths. Guard hairs tend to have a coarse texture, but the coat is very dense and overall soft and plush. The whiskers are curly as are the eyebrows. The Selkirk Rex is a medium to large cat with good balance between legs and body. Heavy boning gives the cat surprising weight. Females are less massive than males, but both sexes have definite jowls. Coat continues to develop until about 2 years of age, so kittens should be judged mainly on head and body type. Kittens are curly at birth and may lose their coat and begin to develop an adult curly coat at 8-10 months of age.