Scottish Fold at a Glance

Scottish Fold at a Glance 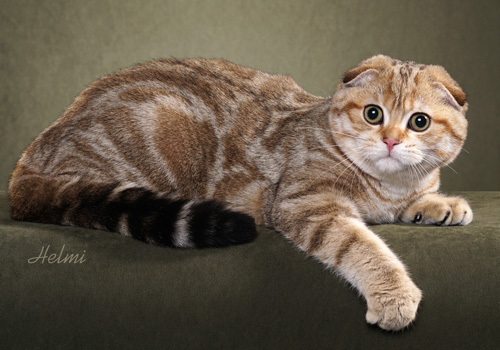 The unique folded ears of a Scottish Fold fit closely to their scull, giving them an owl-like appearance or as if they are donning a cap. They are loyal cats that bask in the company of their families. Intelligent and inquisitive, but a little less active than other breeds around the house. They get along well with children and other pets. The shorthair variety requires a weekly brush through and the longhair variety requires a weekly combing, other than that they do not require much grooming. Find out more about this breed and if the Scottish Fold is right for you and your family.

About the Scottish Fold

With ears as their signature feature, giving them a look that resembles an owl, the Scottish Fold is a sweet, charming breed. A natural genetic mutation creates the unique folded ears, but their ears work just as well as any other cat’s.

Scottish Folds are intelligent, inquisitive, and are loyal to their family. Many do enjoy being held but often will follow the family around the house and never leave their side. Their tail should be handled gently and are known to develop stiffness that can cause pain if manhandled. They can be found in both the long and shorthair varieties..

Activity Level:
Scottish Fold’s are good eaters and not as energetic as other breeds and therefore need to be engaged on a regular basis to be active. Take advantage of their love for human interaction and attention by keeping them engaged in interactive play to keep them fit and healthy. Challenge their brain by teaching them tricks and provide puzzle toys to test their intelligence. 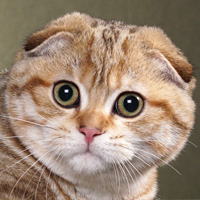 Grooming
Scottish Folds are both the long and shorthair varieties. They have dense, plush coats and lightly shed year round with heavier shedding periods during the spring and fall. Brush shorthaired Folds weekly to remove loose hair. Longhaired Folds may require a comb through several times a week, those with less undercoat may require less. Monthly bathing helps remove loose hair and keep their coats clean.

Scottish Folds tend to be good eaters and are not as active as other breeds. Special care should be taken with their nutrition to prevent them from becoming overweight. As with all cats, Folds are obligate carnivores and require a good quality meat protein-rich diet.

As with all cats, it is important to give your cat fresh, clean water daily. Fresh, clean water is best, so cats don’t hesitate to drink. If you worry about your cat drinking enough water each day, here's a tip from cat behaviorists - place the water bowl at least three feet away from any food. Cats’ noses are sensitive and an overwhelming smell of food may cause them to drink less. Folds love to drink from running water so consider a filtered drinking fountain to use in place of a water bowl.

The ears of a Scottish Fold do not make them more susceptible to ear infections than any other breed. They do, however have a form of degenerative joint disease caused by the same thing that causes the ear to fold. This can show up particularly in their tail, ankles, and feet. It can increase over time, but is recommended to always play gently with their tail. They should be taken to the veterinarian immediately to check for arthritis if any stiffness is noticed or if they appear to be in pain when their tail is manipulated. Folds also should be checked for hypertrophic cardiomyopathy and polycystic kidney disease. It is important to always buy your Fold/Straight from a responsible breeder who does careful breed planning to help reduce joint issues and does veterinary screening and genetic testing to insure healthy, happy kittens.

The first Scottish Fold, found in 1961 by shepherd William Ross, was a barn cat named Susie who lived in Scotland. Folds have since developed into a round and beautiful family lap cat with wonderful temperaments. Susie was a solid white longhaired female and the cat fanciers bred her to various breeds like Persians, American Shorthairs, Exotic Shorthairs and even Burmese to achieve the round sweet look of the Scottish Folds we have grown to love today. Every Scottish Fold alive today can trace his or her ancestry back to the original Susie. Today TICA Scottish Fold breeders are allowed to use the Scottish Straight, British Shorthair, and the American Shorthair in their breeding programs.

The Scottish Fold occurred as a spontaneous mutation in farm cats in Scotland. All bona-fide Scottish trace their pedigree to Susie, the first fold-ear cat discovered by the founders of the breed, William and Mary Ross. The Breed was subsequently established by outcrosses to both pedigreed breeds and domestic cats in the United States. One word can describe the Scottish and that is ROUND in every sense of the word. Round head, body, eyes, and feet. The Scottish Fold is best known for its distinctive ears and large, round eyes, which give it a sweet, open expression. They retain a "kittenish" expression their entire life. The shorthair is medium in size with a plush, dense coat. The longhair has the same standard as the Shorthair Fold/Straight with the exception of the coat, which is semi-long and stands away from the body. However, the longhair gives the breed a somewhat softer overall look. The Scottish Straight is identical with the same sweet open expression but with straight ears.