The legendary Birman takes your breath away with its stunning pointed, semi-longhaired coat and bewitching deep sapphire blue eyes. The silky coat is light in color and ideally misted with a golden hue. They have white gloves on all four feet and white laces up the back of their hindlegs contrasting with the main point color. These gentle cats have a stocky build and a powerful musculature-keep them in top condition by indulging their love for play!

The Birman is a great family cat. It dwells peacefully within a single cat home or a home with many cat friends. With a constant response from his owner when the cat meows, the Birman will become quite a talker. If you prefer just the quietness of his purr, lack of response will discourage the cat from talking. With lots of love, good food, fond grooming, and proper health care, the Birman makes the greatest buddy, friend, confidant, and all around purrfect pet.

The Birman is a medium to medium-large longhaired pointed cat with distinctive white gloves and laces. All four feet have white gloves and the back feet have laces extending about halfway up the back leg.The Birman has a long, soft, almost silky single coat. The thickness will vary with seasonal conditions. This coat is of such that it has a tendency not to mat. With good grooming habits on the part of the owner, stray hairs can be combed out weekly. The combing action can be good together time for cat and owner.

Birmans have a distinctive roman nose that, when viewed in profile, starts at the change of direction at the forehead and rises in a hill-shape that goes down at the end with the nose leather low. The chin has good depth and should not be bulbous or receding. The ears are almost as wide at the base as they are tall. They have good width between them. The eyes are medium to large and moderately round, with good width between. The tail is neither long or short, but in balance with the body. This is checked by gently holding the tail along the back so that it reaches the shoulder blades. The body is long and sturdy. The legs should be well muscled and in good proportion to the body.

Birmans come in all pointed colors. There is a color to match anyone's desire. They are all beautiful.....they are all BIRMAN. 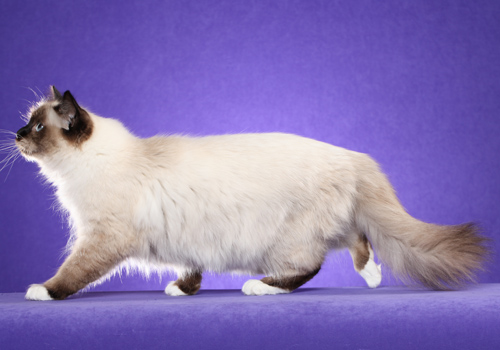