The glamorous Persian cat is one of our oldest breeds and evokes images of distant historical Persia and Turkey. Its long, luxuriant, flowing coat comes in a myriad of colors reminiscent and its pansy-like face with big round copper eyes is open and sweet. It has a short sturdy body and short legs like little tree-trunks to support its massive build. The Persian has been a popular pet since the dawn of the cat fancy in the late 1800s and its popularity remains high today. These are the cats that decorated the parlors of Queen Victoria's day and that are in the dreams of all little girls wanting a fluffy white kitten as a pet. Don't be fooled by their good looks! Persians are extremely intelligent and this helps them adjust easily to both the home and the show ring. They communicate with you with their expressive eyes and expect you to understand their wishes - they will also look at you incredulously when you misunderstand them, after all you are supposed to be intelligent!

While the history of the Persian breed is mainly unrecorded, we do know it has been around for centuries. There are even hieroglyphic references to a longhaired cat in the region. The exact origins will never be known but we do know that the first cat shows in Britain included Persian cats. These early cat fanciers defined the standard that was to give the Persian its modern look. The early Persian descriptions sounded very like today's description: round head, short face, snub nose with stop, round full cheeks and a cobby body with a deep full chest. Since the late 1800s, cat fanciers have been selecting for rounder heads, smaller ears, shorter noses, bigger eyes, cobbier bodies and heavier boning. The Persians of today look little like the Persians of yesteryear.By 1900 Americans were importing Persian cats from Great Britain and their popularity continued to grow worldwide as the cat fancy itself began to grow as well. Blue Persians and Silver Persians were particularly popular. And we find many references to show winning Persians in the early newspapers. Mrs. Clinton Locke (Lockehaven) was one of the early breeders in America winning shows with cats like her silver male Lockehaven Smerdis (1900), her blue female Melrose Lassie (1901) and her blue male Romaldkirk Lupin (1902).The bi-color Persian was more recently recognized for competition but has been around since the beginning of the breed. Bi-color cats are an expression of the piebald spotting gene and this gene had, and continues to have, a high distribution in the eastern feline populations. We know from Frances Simpson (1903) that the bi-colors were shown but were not popular in England. Their popularity waned in North America as well during the early years. Today these flashy Persians are one of the more popular colors.

The Persian has a sweet, gentle nature and blends easily into most households as they become comfortable in their new home. They are creatures of habit and prefer a calm atmosphere and gentle handling. They are happy to be combed and petted by children but are unlikely to join in boisterous games with them. They have quiet, musical voices but communicate mainly with their large expressive eyes. They like the security of the ground and are unlikely to be found leaping to the top of bookcases to explore the high ground. They eagerly play with a toy or a teaser but are equally happy to drape themselves decoratively in a favorite spot. The Persian cat will not demand your undivided attention but it will relish your attention when are ready to lavish some time on it. These are gentle cats that are comfortable in their own homes whether you are there or not, but be happy to see you when you return.

Persians are medium to large cats with well-developed muscular bodies. They are short and cobby with little short legs. This powerful package is the epitome of massive - with the massiveness coming from musculature over the powerful body rather than overall size. Their heads are round with open sweet expressions earning them the comparison to the beautiful pansy. The ideal Persian has a head as round as a ball and a square body balanced by a short thick tail. Huge round copper eyes light up the face and the snub nose sits right between the eyes. The break is the center of the face and the round dome is as high above it as the round chin is below it.

The long, luxuriant coat is the hallmark of the Persian. A heavy ruff surrounds the head, the coat flows over the body reaching to the floor in top examples of the breed and the tail is a thick flowing plume. The Persian coat takes time to maintain and each color and pattern has a distinct texture that requires special care. There are two main textures: A silky one associated with dominant colors like red and black that is shinier and more resilient than that associated with the dilute colors; And a soft cottony one that dilute colors, such as blue and cream, tend to have. This soft coat stains and mats more easily and needs extra attention. Whites can have either type of coat.

The coat needs daily combing with a metal comb to prevent tangles that can develop into mats and to remove loose hair that could result in hairballs. A regular bath is necessary and the routine should be established early with the young kitten. Many Persians love their bath once accustomed to it. After a towel dry to remove a lot of the moisture, the coat needs to be combed smooth as you gently blow it dry. Use conditioners to prevent the coat from drying out. Eyes should be wiped daily as the large eyes can attract dust and other irritants that may cause the eye to run.

The glamorous, dignified Persian comes in a wide array of colors so choose your favorite and enjoy a delightful companion - but be prepared to spend the time grooming your new addition. While tangles and mats are unsightly, they are also uncomfortable for the cat and can tug at the skin. They can also be painful to remove so care should be taken if one is found. Adding an engaging Persian to your world will add an extra splash of glamour to your home with this very special gentle companion. 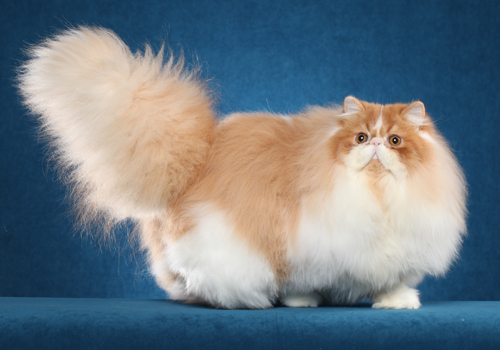