Large celadon eyes twinkling with mischief in an angelic face help the Singapura reach out and capture the imagination while stealing the heart. These delightful delicate-looking cats dressed in the colors of the old sepia photographs are into everything looking up at you with big innocent eyes when you find them engaged in some mischief. No matter what, the combination of those eyes and their enchanting personality quickly has you forgetting their antics and reveling in their affection. The Singapura is the smallest breed of cat but is an energy-packed companion that wants to help you with everything you do. In 1991, the government of Singapore recognized the cats as a living national treasure.

The Singapura, whose name is Malaysian for Singapore, originates from Singapore in South East Asia where the ticked coat pattern and dark brown color are a common local combination recognized as the original gene pool for ticked tabbies. Hal and Tommy Meadow (USAF) brought the ticked cats home with them when they returned to the U.S. in the early 1970s. In 1971, Hal, a geophysicist working in South East Asia, sent some cats home to Tommy in the US that she proceeded to breed. In 1974, Hal was transferred to Singapore and they moved there with their cats-a blue Burmese, a spayed sable Burmese and three ticked cats that were the grandchildren of the original cats Hal had sent to Tommy in 1971. In 1975 they returned to the US with 5 brown ticked cats: Pusse, Ticle, Tes, and kittens from Pusse and Ticle named George and Gladys. In 1980, Barbara Gilbertson imported another brown ticked cat, named Chiko, from the SPCA in Singapore.On their return to the US, the Meadows began a breeding program to establish the Singapura breed consulting noted British geneticist on their concerns about inbreeding. Occasionally solid brown kittens appeared in the litters and by 1985 it was clear some Singapuras carried a recessive gene for solid color. Breeders established a test-mating program to identify the cats carrying solid and eliminated them from the breeding stock-by 1988 only 7 cats had been identified and placed as pets. In 1987, an early Singapura breeder named Gerry Mayes went to Singapore to find more foundation cats and brought some back to the US that he registered with TICA. Today, the breed is still rare but has a dedicated following among breeders and pet-owners. TICA accepted the Singapura for championship competition in 1979.

The impish Singapura is a curious, extroverted little cat that just has to help you with everything you do. They're intelligent, interactive personalities are one of their most endearing attributes. These inquisitive minxes are into everything and are definitely not a four-paws-on-the-floor cat wanting to be high on your shoulder or the top of the kitchen cabinets so they can have a bird's eye view of everything that is going on. They are affectionate cats that love to be with people whether it is curled in a lap, riding a shoulder or snuggled up in the bed at night. Lively and active, the Singapura is a gentle playful cat with a soft, gentle voice that also gets on well with other cats. Perhaps it is their kittenish looks and ways or perhaps it is the shining innocence in their eyes but somehow the Singapura has a magical presence that enchants all it comes in contact with, from people to other animals.

Singapuras come in one color only-but what an ethereal color! Rich warm sable brown ticking against an old ivory background, often with yellow tones, fading on the undersides to unbleached muslin-just like the tones in old-fashioned sepia photographs. And brilliant, rich deep eye colors in shades ranging from celadon green through hazel or gold to copper offset by dark mascara markings and facial lines. A tabby M appears on the forehead and there are bars on the inside of the front legs and on the knees of the back legs, underscoring the delicate coloring.

They are the smallest breed of cat and do not develop their full size until they are almost 2 years old. Vets who are unfamiliar with the breed may be concerned that there is something amiss given a kitten's small size-but there is nothing wrong. Even when fully mature, Singapuras are small cats with little size difference between the males and the females-males weigh 6 to 8 pounds while females weigh 5 to 6 pounds.

They have rounded heads whose most noticeable features are the large, brilliantly colored eyes and the dominating large ears set just off the parallel giving the cats a very alert expression. Their bodies are compact but powerful making them into little dynamos as they race to the next adventure on their strong medium-boned long legs. While the boning is medium, the cats are small and medium is a relative term in proportion to overall frame of these little bundles of energy. 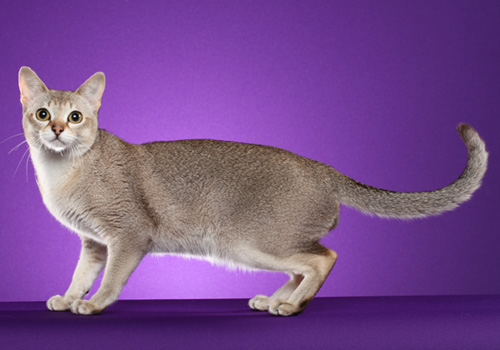