The Burmilla is a medium-sized cat with a muscular yet elegant body. The head is sculptured in appearance, where the rounded top head, nose profile, medium broad muzzle and well-developed chin set the balance. The eyes can be any shade of green and are often greenish gold to yellowish in youth, with the green coming in as they mature. The overall look should be somewhat like a Burmese, but with a sweeter, more open expression. Their distinguishing feature is their sparkling silver coat, and distinctive "make up" lining the nose, lips and eyes. The Burmilla comes in two coat lengths, semi longhair and shorthair.

While the Burmilla is the newest breed to grace the cat fancy as a TICA breed, the origin to this breed dates back over 30 years ago. Baroness Miranda Von Kirchberg originally purchased a Chinchilla Persian male, Jemari Sanquist, as a pet for her husband. Shortly before having him neutered, he accidentally met up with a precocious Lilac Burmese female, Bambino Lilac Faberg. When a cleaner inadvertently left Faberg's door open, she was able to escape and mated with Sanquist, thus producing the very first litter of Burmilla. The result of this mating produced 4 female kittens, all shorthair and black shaded silver in color. These kittens, born on September 11, 1981, were so attractive that it was decided to embark upon a breeding program. Burmillas are still quite a rare breed in the USA. Look for kittens available from reputable breeders twelve to sixteen weeks of age, after they have been well socialized and have had their inoculations. Keeping such a rare treasure inside; neutering or spaying and providing acceptable surfaces scratching posts are essential elements for maintaining a healthy, long and joyful life.

The Burmilla is an irreverent and independent cat that adores its owner and displays many kitten-like characteristics even into adulthood. The temperament of the Burmilla is quite exceptional. The demanding and mischievous nature of the Burmese, mixed with the easy going and laid back personality of the Chinchilla Persian, makes the Burmilla sociable, playful, and affectionate. Fun loving, yet quiet and gentle, this sweet natured cat gets along well with children and other animals. In all, an intelligent inquisitive nature and a most affectionate seductive personality are some irresistible qualities of the Burmilla.

The Burmilla Longhair is a true semi-longhair, with a fine silky coat, feathering to the underside, britches, plume, and bib. These cats should not require intensive grooming and should not look like a pet quality Chinchilla, i.e. big full coat, short legs and cobby body, extreme short face and little ears. They should be a Burmilla in fancy dress. 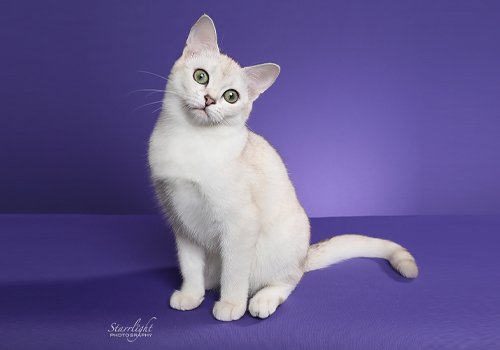