The majestic Siberian is a strong, powerfully built cat with strong hindquarters helping them jump exceptionally high. They are a slow-maturing breeding reaching full magnificence at about 5 years of age. Siberians are large cats with a substantial rounded body reminiscent of a barrel and heavily boned legs to support the substantial body structure. Their paws would do a heavyweight boxer proud! But for all their powerful strength, these are gentle cats that enjoy playing and clowning around with their families.

Siberian cats have existed for a long time. The earliest know reference is from 1000AD. In the 1870s they appeared in the first cat show and we also find a reference to Siberian cats at the 1884 show in Madison Square Gardens. Noted cat fanciers mention them in their books in 1889 (Harrison Weir: Our Cats) and 1898 (John Jennings: Domestic & Fancy Cats) along with the first photo of one in 1900 (Helen Winslow: Concerning Cats). But while we find early references to the early Siberians, there is little documented information about them. The 1980s saw the rise of the cat fancy in Russia and records began to be kept. Kotofei Cat Club in Moscow created the first standard and used 2 cats as the model for it: Mars-a blue lynx point and white--and Roman--a brown tabby and white. At the 1989 All Union Cat Show there were 12 Siberians entered. In 1990 Elizabeth Terrll (Starpoint) imported three cats to the USA: Ofelia, Naina and Kaliostro. In 1997 Dana Osborn (Willowbrook) imported the first colorpoints Ustin El Magrib of Willowbrook (seal lynx point male) and Roksana Babyan of Willowbrook (seal tortie point female) and in 1998 the first color point litter was born. TICA accepted them into the New Breed program in 1992 and in 1996 granted them championship status.

Siberians use their incredible intelligence to solve all kinds of problems-like determining to how to open a door to be with the owners they adore, how to get to the cat food for an extra meal, or how to recover the favorite toy their owner thinks they have so cleverly hidden out of reach! They are powerful agile cats that can leap great distances and heights, sometimes appearing to fly through the air, but despite their size, they are adept at negotiating obstacles in their path without knocking them over. At the same time, they love to play and will entertain you with their clown-like antics. They adore their human families and their visitors-with children holding a warm spot in their hearts. They have a wonderful depth to their purr and talk to you with a chirping sound, particularly when they are coming to greet you when you have been out.

While considered a semi-longhair, the Siberian's coat varies with the season. In the winter, it will have a thick, rich, full, triple coat that would have protected it from the elements in its native Russia. In the summer, they shed the heavy winter coat for a shorter, less dense coat. They come in a wide variety of colors and patterns, including pointed, with deep intense colors and rich patterns that make them a dramatic stand out from the everyday cat.

The Siberian is a medium, strong cat with heavy boning and a powerful musculature that takes up to 5 years to reach full maturity. They have rounded contours to the body resembling a barrel and rounded, gentle contours to the modified wedge head. Their large eyes are almost, but not quite, round and will appear rounder when the cat is alert or startled. Their hind legs are slightly longer than their front legs giving them the powerful lift they need to get to those high places they just have to reach! The overall impression of the mature Siberian is one of the balance, circles and roundness. 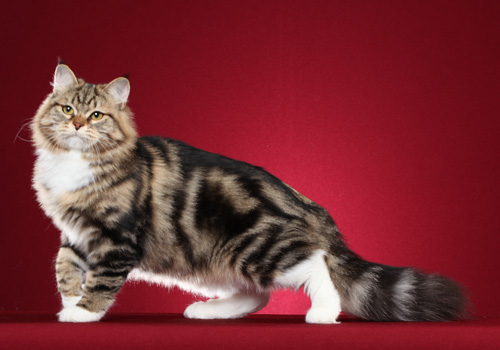