Abyssinian at a Glance 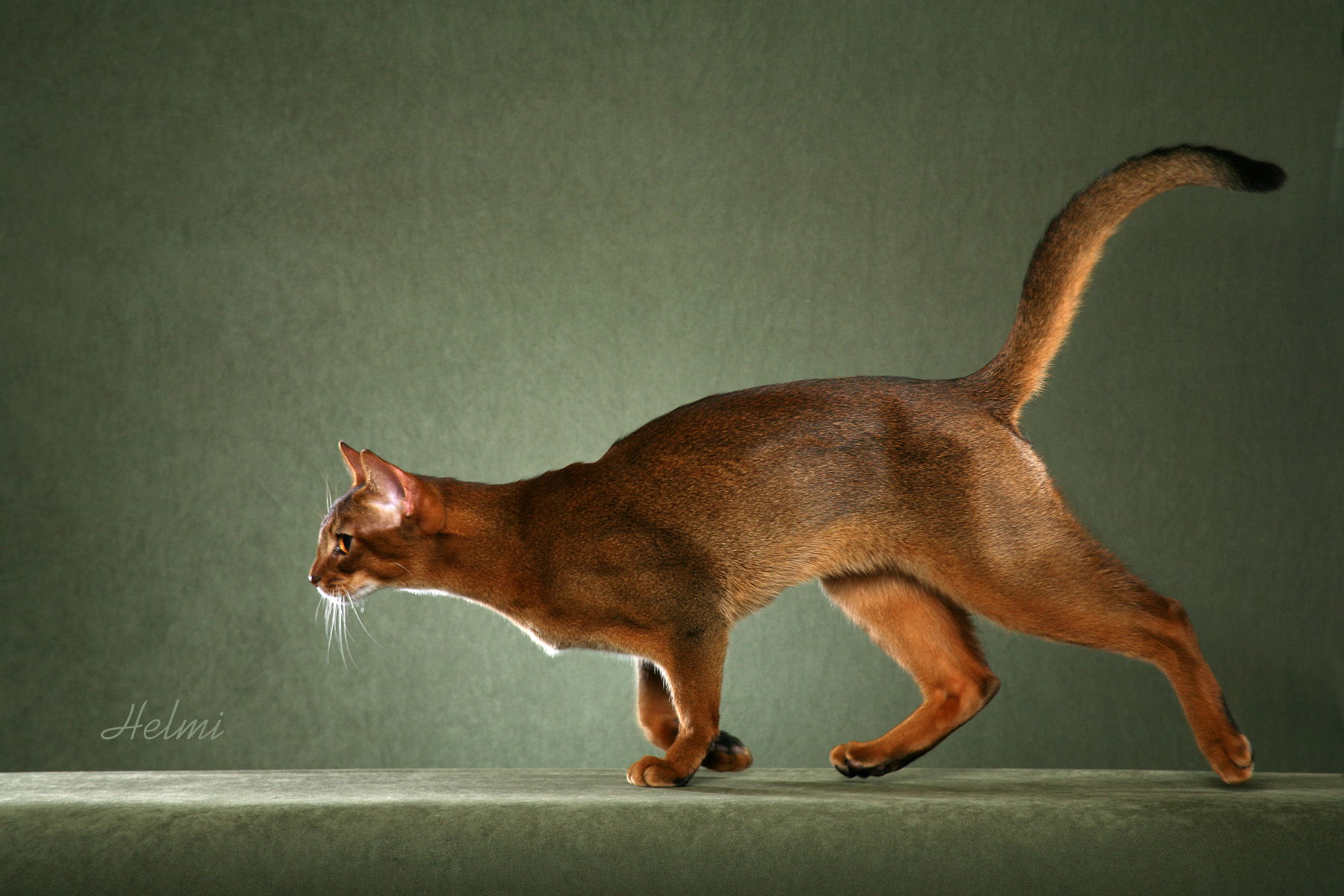 Considered to be one of the oldest cat breeds, Abyssinians (Abys) are tremendously devoted felines. Their distinctive almond-shaped eyes resemble the elegance of the cat statues found in ancient Egyptian tombs. Easy to groom, they are easy to care for and make a great addition to a family. Find out more about this breed and if the Abyssinian is right for you and your family.

Known for their unique ticked coat, Abyssinians have the appearance of a wildcat. They are athletic, alert, very active, and intensely curious with all that surrounds them. Fiercely loyal and highly people oriented, Abyssinians are referred to as the cat of the dog world. They are generally great with children, dogs, and other cats.

Activity Level:
Abyssinians are extremely graceful, lithe, and elegant. They show a lively interest in their surroundings and are famous for their playful and curious disposition. Most Abys will stay kitten-like throughout much of their life.

Abys prefer the highest ground they can reach. They love to be on the highest level possible where they are able to observe the room, make decisions, and even guard their family. Don’t be stunned if you find a “flying” Aby on your shoulder! 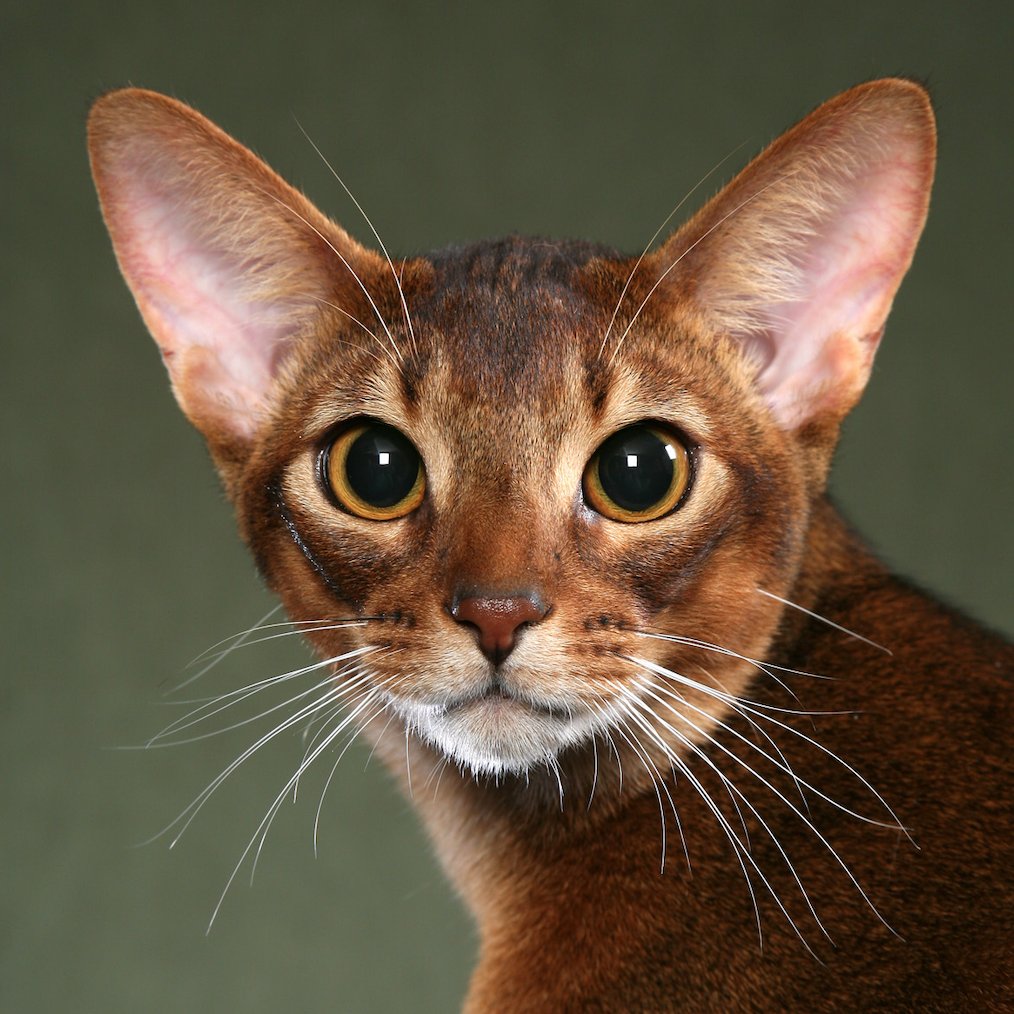 Grooming:
Abyssinians are known to many as the “wash and wear” cat. Their grooming requirements are low as they shed very little and have a short, easy-to-maintain coat. An occasional brushing is all that is required to eliminate dead hair and an intermittent rub down with a cold damp cloth will also help to keep their coat glossy and in good condition. Bathe as needed, starting when your Aby is a kitten. After bathing, pat down with a towel and leave the coat to “drip-dry” on its own.

Nails should be trimmed every two weeks. Begin brushing their teeth regularly at an early age with a vet-approved pet toothpaste.

Nutrition:
As with all cats, it is important to give your cat fresh, clean water daily. Fresh, clean water is best, so cats don’t hesitate to drink. If you worry about your cat drinking enough water each day, here's a tip from some cat behaviorists: place the water bowl at least three feet away from any food. Cats’ noses are sensitive, and an overwhelming smell of food may cause them to drink less. Filtered drinking fountains (stainless steel preferred) can also be used in place of a water bowl.

Health
Abyssinians are generally healthy, but as with all breeds, they are prone to certain health conditions. While knowledgeable breeders do their best to test for and eliminate genetic health problems, cats may still develop certain diseases or conditions. Abyssinians may have a higher risk for the following:

It is important to note that PK-Def and PRA can be diagnosed through genetic testing so be sure to ask for certification from the breeder.

The Abyssinian is one of the oldest breeds of domesticated cats, but its real ancestry is lost in time.

Romantic tales call it the cat from the Blue Nile saying it is a direct descendant of the sacred cat of Ancient Egypt because it resembles the cats depicted in Egyptian murals and artifacts. Others believe British soldiers from Abyssinia (now Ethiopia) brought a cat named Zula home with them to England at the end of the Abyssinian war in 1868. So far, no documentation links Zula to the cats of today and recent genetic studies identify the cats in the coastal area of the Bay of Bengal in India as the Abyssinian's potential forebears.

The Abyssinian was developed and refined in Britain. The first Abyssinian arrived in the United States in the early 1900s and they were first exhibited in 1909. In the 1930s an effort to develop the Abyssinian in the US began and it quickly developed into one of America's favorite breeds because of its expressive eyes, unique coat pattern and personality. The Somali is the stunning long-haired descendant of the Abyssinian and is named for Somalia which borders Ethiopia, formerly Abyssinia, to represent their connection to each other. TICA accepted the breed into championship status in 1979.

The Somali cat is a longhaired Abyssinian

The overall impression of the ideal Abyssinian is a medium cat, regal in appearance. The Abyssinian is foreign in type. Males proportionately larger than females, the female being finer boned and usually more active than the male. The Abyssinian shows firm muscular development and is lithe and panther-like in activity, showing a lively interest in all surroundings. The coat of the Abyssinian has an iridescent quality. Coat pattern is genetically a form of agouti ticking with even, dark-colored ticking contrasted with lighter bands giving a translucent effect. The Abyssinian is of sound health and vigor, well-balanced physically and temperamentally gentle and amenable to handling. 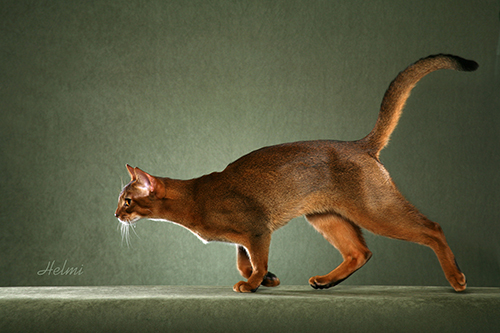