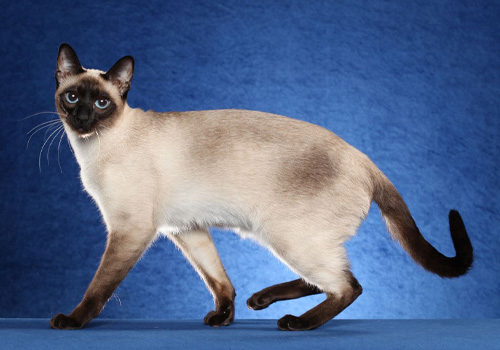 Thai Breed at A Glance

Known for their intelligence, Thais are a communicative and extremely people-oriented breed that thrives on being involved in everything that goes on in their environment.  For those who want a close companion, this is your breed. Find out if the Thai is right for you and your family.

Thai cats pack a ton of personality into their medium to large frame. They are a “chatty” breed that will greet you at the door and tell you about their day. They adore spending time with their families and thrive on as much love and attention as they can get. They form strong bonds with their families and like being involved in everything that goes on around them. Because they form such strong ties with their owners, they do not like being left on their own for any length of time. Their outgoing, affectionate, easy-going personalities make them the perfect breed for families with older children.

The Thai is very active, athletic, inquisitive, and mischievous breed. They are stellar jumpers and will readily learn to open cabinets, drawers, and even doors. Play with them daily using wands and other toys to keep them happy and (somewhat) out of trouble. A cat exercise wheel is recommended and will allow them to entertain themselves while they are alone. Thais love to play with children, but will also happily curl up in your lap or on your shoulder. 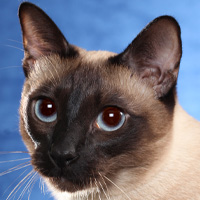 Grooming:
The Thai is a shorthaired, sleek breed that is capable of maintaining its own coat and bathing itself unless their coat becomes soiled with something that would be harmful if licked off.

Their nail tips should be trimmed every 2 weeks and ears should be cleaned regularly. As with all cats, regular dental care is recommended by middle age in order to maintain good health. Teeth should be brushed twice per week.

Nutrition:
Thais are good at adapting to most diets however, the breed thrives when fed a high-quality, premium commercial cat food.

Kittens 3-to-8 months should be fed three times per day while adults can be fed twice a day. But each cat is different. Check with your veterinarian to see what is best for your cat. It is not recommended to leave dry food out throughout the day, known as “free feeding”, as this tends to deter the cat from drinking enough water to compensate for this mostly dry food diet. If provided, treats should consist of no more than a bite or two each day.

As with all cats, it is important to give your cat fresh, clean water daily. Fresh, clean water is best, so cats don’t hesitate to drink. If you worry about your cat drinking enough water each day, here's a tip from Jackson Galaxy and other cat behaviorists - Place the water bowl at least three feet away from any food. Cats’ noses are sensitive and an overwhelming smell of food may cause them to drink less. Always consider the individual needs of each cat. Filtered drinking fountains can also be used in place of a water bowl.

Health:
The Thai is generally a very healthy breed as long as they stay within their recommended ideal weight (see ideal weight ranges above).
Regular dental care and visits to the veterinarian will keep your Thai well into an advanced age.

History:
For at least 700 years, the Thai people have cherished a pointed breed called the Wichienmaat. From Thailand's famous Cat Poems (Tamra Maew), we know Thais bred this cat in the Thai kingdom of Ayudhia, continued to breed them as Ayudhia was succeeded by the kingdom of Siam, and still breed them today in modern Thailand. In the 19th century, British citizens discovered the Wichienmaat, an extraordinary blue-eyed cat with a whitish body and dark points, in Thailand (then called Siam). They found them nowhere else in the world, and decided to import the cats, calling them "Siamese." The goal of the Western breeders was to improve the natural pointed breed of Siam, making it more consistent and more striking in appearance. They soon produced cats with much deeper blue eyes than those in the breed's native country. They also bred for an increasingly stylized head and body. By the 1950s, some Siamese cats in the show ring had much longer heads, finer boning, and slimmer bodies than those at the turn of the century. Many people loved the improvements in the Siamese, but others preferred the older, more moderate look of the breed.

The Thai began to diverge from the Siamese breed in the 1950s, when breeders around the world chose to breed Siamese of the moderate, early 20th century type. In the 1980s, the first breed clubs dedicated to the old-style Siamese appeared in Europe and North America. In 1990, in Europe, the World Cat Federation granted the breed championship status and changed the name to Thai differentiate the old type of Siamese from the show-style Siamese. In 2001, breeders began importing indigenous pointed cats from Thailand to preserve a healthy gene pool for the Thai breed and to preserve the genes of Southeast Asia's native race of cats while they are still distinct from Western cats. In 2007, TICA granted Preliminary New Breed status to the Thai, and in 2009 promoted the Thai to Advanced New Breed, making it possible for breeders in North America and Europe to work together and show together under a single breed standard.

The Thai comes from a genetically unique population of cats that still naturally occurs in Thailand.

The Thai is also called the “Old-Style Siamese” because the breed preserves the look of the Siamese breed as it was over 100 years ago.

The Tonkinese, Korat, Khaomanee, Siamese, Oriental Shorthair, and Burmese come from the same general ancestors in Thailand and have similar personalities. Of these breeds, the Tonkinese is perhaps the most similar in appearance. However, the Tonkinese comes in more patterns than the Thai, and has ears farther apart, a much shorter muzzle and a somewhat stockier body than the Thai.

The Persian is probably the closest to the Thai’s polar opposite – having a much lower activity level, much rounder and stockier body, flat muzzle, and long thick coat. The Persian is also much less vocal than the Thai.

The ideal cat of this breed is a medium to slightly large, pointed cat of foreign type, descended from and resembling the indigenous pointed cats of Thailand. The Thai is intended to be both the living equivalent of the original “Wichien-maat” of ancient Siam and the “marten-faced” Siamese of early 20th century America and Europe. It cannot be stated enough that the Thai should not be extreme in any way, but its appearance and personality should reflect its Thailand heritage. The Thai is not, and should not resemble a native Western breed. The breed began in the 1950s when breeders scattered around the world chose to breed, or sometimes unwittingly continued to breed, Siamese of the moderate, early 20th-century type. In the 1980s, the first breed clubs dedicated to these cats were established in the United States and Europe. In 2001, breeders began importing indigenous pointed cats from Thailand in a conscious effort to expand and preserve a healthy gene pool for the Thai breed as well as to preserve the genes of Southeast Asia’s native race of cats while they are still distinct from Western cats. The trademark of the Thai breed is the unique head shape, a laterally rounded upper head from which projects a distinctly wedge-shaped muzzle. In keeping with the Thai’s roots in tropical Thailand, another important feature is the breed’s very short coat, first clearly described in the West by Harrison Weir in 1889. The Thai is a well-balanced cat without any extremes, in harmony in appearance and character.

Accepted For Championship in TICA in 2010