The Egyptian Mau's impression should be that of a colorful cat of elegant type, having a very alert appearance that gives the cat what could be best described as a regal bearing. There are five unique physical features of the breed that should be apparent at a glance. One is the brow line and characteristic eye set that gives the breed a naturally worried look. The eye color of the Mau is described as gooseberry green. Another is a flap of skin extending from the posterior end of the ribcage to the hind leg, which lends the Mau an uncanny leaping ability and makes the breed capable of great bursts of speed. The final unique attribute is the "tiptoe" stance given by the hind legs being proportionally longer than the front legs. This stance lends a grace look of elegance to the Mau.

There is little doubt that Ancient Egypt was the birthplace of the domestic feline we call the Egyptian Mau. Their ancestors are highly visible in the artworks of the Ancient Egyptians. Many of their pictures were of heavily spotted cats bearing the distinctive mascara marking and barring seen on today's Mau. Recent findings in research studies lead by feline geneticist Leslie Lyons, PhD has confirmed that cats first originated in Egypt. There is archaeological and genetic evidence to show that cats first originated in the fertile crescent. The Egyptian Mau arrived in the United States in 1956 when Russian Princess Nathalie Troubetskoy, with help from Richard Gebhardt, imported three Maus from Italy: Two silver females, Baba and Liza, and a bronze male called JoJo. The Mau was granted recognition in The International Cat Association in 1979.

The origins and history of the Egyptian Mau are important to understanding the ideal cat to which Mau breeders aspire. Through the years, it has been challenging to meet the standard while maintaining the distinctive qualities and characteristics of the breed. This was especially difficult due to our very limited gene pool. Recent imports have broadened this gene pool and helped improve the overall quality and uniformity of our cats. This has all been a challenge to our breeders and judges, but we have met it and now the Egyptian Mau is beautiful, it is healthy, and it is winning in the show ring!!

The Egyptian Mau has often been thought of as aloof and shy. To a certain extent, the breed can be, but the breed has a special affinity with its people. It is a close bond that is so different than with other breeds. A typical Mau will command your attention. It will not allow you to push it away, as it craves the touch of the special person(s) that are his and his alone. It is the center of your world, and the Mau knows that by this he takes over your life with his incredible, but gentle persistence of being the sole factor that has any reason for existing. The breed is intensely loyal and yet happy to go about his business of being a cat. But when it is ready for you, there is no stopping the love, attention, and adoration of the Egyptian Mau is going to bestow upon you.

The Mau has an extraordinary power of scent, hearing, and sight. They are a shy sensitive cat that is easily upset by sudden loud, unpleasant noises. If you plan to show them you must start working with them at birth so that they will accept sounds and handling of the ring.

The Mau is the only natural spotted breed of domestic cat, showing good contrast between the background color and pattern. The pattern is random with any size or shape of distinct spots. They have an "M" on the forehead, often referred to as the mark of the scarab, and a dorsal stripe travels the length of the spine to the tip of the tail. Legs, tail, neck and upper chest are barred with at least one broken necklace. The haunches and shoulders show a transition between spots and stripes.

The eyes are large and alert, shaped like a slightly rounded almond, with a slant towards the base of the ear. This eye set contributes to the characteristic "worried" look of the breed. The eye color of the Mau is gooseberry green. If you have never seen a gooseberry, a green grape comes close but isn't quite the same.

Its head is a slightly rounded, wedge-shape of a medium length. The profile has a gentle concave rise from the bridge of the nose to the forehead, not to be dishy or arrow straight. The slightly flared ears are medium to large, alert, moderately pointed and broad at the base. The hair on the outer ear is very short and close-lying that results in an almost transparent look when combined with the delicate shell pink inner color.

The Egyptian Mau is a statuesque breed that often strikes poses on the judging table. The muscular, elegant body of this graceful feline athlete is hard and lithe. When standing, the Mau has a characteristic "tiptoe" stance, with hind legs longer than the front. The body rises gradually from the back of the prominent shoulder blades to the hips. The medium-length tail tapers slightly towards the dark tip. The hair displays a lustrous sheen on all three accepted colors: silver, bronze and smoke. Its coat is medium in length; in the smoke color the coat texture is silky and fine. In the silvers and bronzes the coat is dense and resilient to the touch. 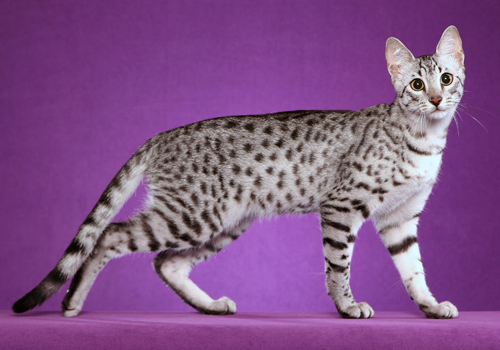