An endearing baby-doll face set upon a low-slung body ensures that the Minuet will quickly capture your heart. A man-made breed, still in the early stages of development, the short-legged Minuet is known as a Standard, its long-legged counterpart, a Nonstandard. Derived from the combination of its two parent breeds, Persian and Munchkin, the Minuet has the Munchkin to thank for its short legs but claims the majority of its traits from the Persian Group (Persians, Exotic and Himalayan). As such, it beautifully serves its dual purpose as a loving, laid-back companion, and a glamorous showpiece. At this time, only Minuet Standards are eligible to be shown. The Minuet Nonstandard, however, is just as valuable, both as a loving companion and an important part of any Minuet breeding program.

The Minuet "journey" began on June 12, 1995 with an article in the Wall Street Journal about the Munchkin. Founder Joe Smith saw this article and was immediately enamored with this short-legged cat. Having been a Basset Hound breeder for many years, he was delighted that the short-legged (dwarf) gene had finally appeared in the cat world. Joe soon learned however that the short-legged gene for cats is not totally dominant as it is in dogs. Even when two short-legged cats are bred together, there will always be approximately 50% long-legged cats that do not carry the short-legged gene. In spite of the unique appearance of the Munchkin, Joe soon realized that the inevitable long-legged version of the Munchkin was indistinguishable from the everyday domestic cat. Recognizing the significance of this new mutation in the cat world, Joe felt that something needed to be done to create a cat unique and purebred-looking in both its short- and long-legged versions. Coming from a dog show background, Basset Hounds in particular, Joe had observed that every short-legged (dwarf) breed of dog came with an ultra-sturdy frame. From the 60-pound Basset Hound to the eight-pound miniature dachshund, what they shared in common was substance and substantial boning. He felt this was an important feature that had to be incorporated into this new dwarf breed of cat. As good fortune would have it, Joe had developed a close friendship with Persian breeder Deb Kenny of Sejumay Persians. Discussions with Deb about using the Persian as an outcross were held and in that instance, Deb became not only a mentor as to the world of cat breeding, but also an invaluable aid in selecting appropriate Persian outcrosses to the Munchkin. It was decided early on that all members of the Persian group would be used (Persian, Himalayan and Exotic), giving this new breed an unlimited color palette that could be incorporated into both long and short-haired cats. The combination of these two parent groups would indeed create a new breed unique from both … short of leg yet abundant in coat and round in every feature, minus the high nose and extreme facial features of the Persian. In February 1996, Joe purchased a Munchkin kitten from Penny Squires of Penhaven Munchkins. Fortunately, this kitten happened to be a granddaughter of a show Persian that Penny had bred with to acquire the long-haired gene. In due time, Deb Kenny provided a young Exotic boy, and the first litter arrived late in 1997. With Persian on both sides of the pedigree, the desired look was well established in this very first outcross.

If ever there was a breed of cat meant to represent the maxim “Nothing worth having comes easy,” that would be the Minuet. Controversy seemed to surround this new breed from the beginning, starting with not one, but both of its parent breeds. At the time, the short Munchkin had the cat world reeling. The dwarf gene has existed in dogs for centuries, not so in the cat world. For good reason, cat-folk were up in arms and quite leery of this new (to them) phenomenon. On the Persian front, even though a long established breed, struggles had recently occurred over the Himalayan (pointed Persians, originating with the Siamese) and currently were ongoing with the Exotic (short-haired Persians, originating with the American Shorthair). One can only imagine the uproar created when a new breed was being created combining both of these highly controversial entities. Fortunately, our path was firmly affixed under TICA’s “Classification of Registrations,” as a Domestic Hybrid Breed: “A breed developed from an existing outcross between two existing domestic breeds, incorporating characteristics of both parental breeds into the new breed.” The Minuet would be neither a Munchkin nor a Persian, but that fact made the road no less rocky. Lastly, the Minuet’s original name, Napoleon, was never met with total acceptance. This problem lingered until 2015 when TICA voted to change its name to Minuet. In spite of these controversies, and many setbacks, the breed, and its breeders, persisted. In addition to Deb Kenny’s invaluable guidance, Joe was also fortunate to obtain the assistance of two very prominent women in the TICA family: Solveig Pflueger and Gloria Stephens. Solveig was, among many things, Genetics Chair for TICA. She explained, guided, and often lent support as the Minuet navigated the difficult path to full registration status. Gloria, TICA’s judging administrator, and author of many best selling cat books, lent her expert assistance in drafting the breed’s first standard (a detailed description of the breed’s attributes). In 2006, Joe was able to close his cattery as breeders were springing up all across the United States as well as in Europe and Asia. Everyone soon came to realize that the Minuet’s biggest asset was the Minuet itself, its popularity soared. Finally, on January 23, 2016, at TICA’s annual meeting, following an excellent presentation by then Breed Chair Samantha McConnell and Minuet breeder Lynn Helke (assisted by Lynn’s lovely cat Lil-Darlynn All That Glitters), TICA’s Board of Directors UNANIMOUSLY voted to promote the Minuet to full championship status. We are truly grateful to TICA for this honor, capping a long but worthwhile journey.

The Minuet is a charming, extremely affectionate, and people-oriented cat. They have the gentleness of the Persian and the energy and curiosity of the Munchkin. Their big eyes and sweet faces give them a look of complete innocence, while their inquisitiveness can land them in all kinds of trouble! While gentle, they are also self-starting when it comes to activity and can navigate the tightest of corners at breakneck speed, their low center of gravity definitely coming into play.

In appearance, the first thing you notice is the sweet face, and then the short legs. While derived from the Persian and the Munchkin, the Minuet is a distinct breed with its own characteristic look. If a single word would be used to describe the Minuet, that word would be “round.” The head is generally round, with big round eyes, topped with smallish ears with rounded tips. The muzzle and nose are short, blending into the forehead with a gentle slope when viewed in profile. While short in stature (Nonstandard), this is by no means a “miniature” cat. The Minuet’s boning should be significant and its body sturdy and substantial. The coat of the Minuet, while not as massive as the Persian’s can be, is abundant and dense in both long- and short-hairs. While not overwhelming in its upkeep, the Minuet’s coat does well with daily combing, an activity much enjoyed by the Minuet and one which, if done faithfully, should take no longer than a few minutes. In essence, the Minuet, a darling cat with a darling personality. 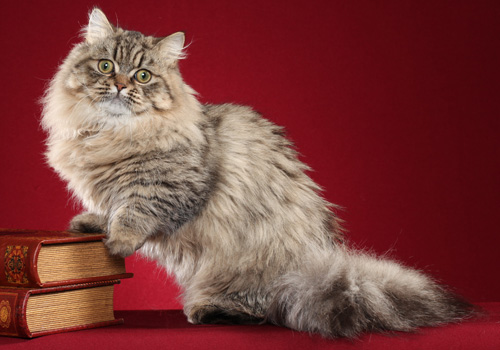