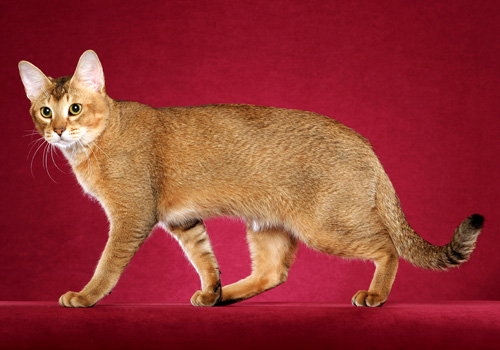 Curious and intelligent, Chausie (pronounced chow-see) cats like to explore cupboards and be in the middle of everything. Their playful demeanor often lasts well into adulthood making these domestic cats intriguing companions. They are easy to groom. Find out more about this breed and if the Chausie is right for you and your family.

Affectionate, active, people-oriented cats, Chausies are all about pleasing their humans and giving out lots of love and attention. They are highly intelligent and very talkative. Chausies love to learn new tricks —playing fetch and walking on a leash are two of their most successful abilities. Constantly curious, their playful demeanor stays with them long into adulthood, making them seem forever young.

Activity Level:
Active, playful, and outgoing, on the energy scale Chausie’s are an eleven. People considering this breed should be prepared for a cat that gets into everything… all the time. They love the challenge of getting into a cabinet and removing its contents. As a result, many owners have been known to install child proof latches. Chausie’s are active for long periods of the day and require a lot of interaction and playtime. They like to run and have been known to jump six feet straight up in the air.

Due to their high activity level, Chausies don’t like to be left alone for long periods of time and do well with a companion cat. They are best suited for adults and families without young children. Despite their high energetic traits, they are still affectionate and form strong and loving bonds with their families. 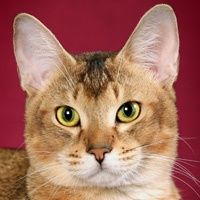 Grooming
The Chausie is a very low maintenance cat that only needs to be combed occasionally and doesn’t need to be bathed.

As with all cats, trim their nails once a month, clean their ears and brush their teeth regularly with a vet-approved pet toothpaste and provide a nice tall scratching pole to help their natural scratching instinct.

Chausie cats are very active so they don’t gain weight easily. They should be fed twice a day. They do best with high-quality canned food. Treats should be provided on demand.

The Chausie is considered an overall healthy breed. However, it is recommended that their vaccinations and parasite treatments are kept up to date.

The Jungle Cat has an extensive history dating back to the time of the ancient Egyptians. These cats were domesticated by the Egyptians because of their easy-going temperaments and adept hunting skills. Mummified Jungle Cats have been discovered in Egyptian tombs attesting to the high regard in which they were held. These magnificent cats were often mummified with their owners in formal funeral rights to accompany them in the afterlife. Some say the statues of the Goddess Bastet were modeled after the Jungle Cat and the resemblance is certainly seen in her long slender body, svelte appearance, and large ears.

Occasionally the Jungle Cat mated with domestic cats, and there have been numerous reports of hybrids from across North America to Southeast Asia, including India dating back centuries. However, the first recorded breeding of a Jungle Cat and a domestic cat was recorded in 1990.

After breeders began working together, TICA awarded the Chausie foundation registration status in 1995, and Championship status starting May 1, 2013.

Opposite Breeds: Ragdoll and Persian

The Chausie should resemble its non-domestic ancestor, Felis chaus. Accordingly, the Chausie is a tall, long-legged, lean and supple cat. It is built for running and jumping over water, reed beds, and other obstacle-filled terrain. Like a basketball player or an Olympic long jumper, the Chausie is ectomorphic, with musculature and lanky body low on bulk, built with the limberness and reach for a long stride and lightning pounce The breed has a deep chest for lung capacity, but flat sides for light weight and flexibility. Like Felis chaus, Chausies have large, upright, preferably tufted ears, a long forehead and muzzle, and a slightly short tail. The eyes are flattened above and rounded below, above exotically slanting high cheekbones. Temperament is predominantly domestic. Chausies are good-natured, loyal, highly intelligent and trainable. They are active, curious, playful cats that require stimulation and company.

Accepted For Championship in TICA in 2013