Household pets are made of three general groups: mixed breed/random-bred cats; half-pedigree "oops" cats; and pedigree cats which are either unregistered or do not meet the breed standard (such as straight-eared Scottish Folds or non-curly Selkirk Rex, or even a Persian whose nose is too long). They are our everyday companion cats who bring joy to our lives. Many have been adopted from shelters and have found new, loving homes where they blossom in the love and attention they receive from their new owners.

The basic mixed breed cat goes back to the days of the Pharaohs and perhaps before. Even though early cats tended to be somewhat uniform within a geographic area, over time these early populations became mixed as cats were found on sea-trading vessels and the like, and often abandoned ship joining the local feline population. Cats survived the witch hunts of the 1500s and 1600s, though their numbers were severely reduced. As people realized that cats were valuable in curtailing rat populations and were in fact good companion animals, their numbers grew. At first most cats were allowed to breed randomly and could be considered the ancestors of today's mixed breed cats. In the early 1830s fairs were well-established in the north east USA and farmers had contests where their 'coon' cats that guarded the barns competed for awards like the fullest tail - these cats had tails resembling the raccoon. In the late 1800s, the first cat show was held at the Crystal Palace in London. While some of the cats were pedigreed', others were of mixed breeds and of non-pedigreed heritage. The early cat fancy focused on the unusual and different as well as colors and patterns. These same attributes are seen today at the modern cat show in the Household Pet class.

In household pets, there really is no one personality type. Those that are unregistered pedigree cats will generally exhibit the traits of their breed. The "oops" cats will generally, though not always, exhibit the traits of the pedigree parent, or if two pedigree cats are involved, they may exhibit either personality, or something else entirely. With mixed breed cats, there is truly no way to guess. Even if you know both parents, the actual personality can be a surprise and may be based more on early environment than on ancestry. In this class, the feisty tortoiseshell cat with an interesting blaze competes equally with the kitten-like antics of a solid blue whose ear shows some scarring from frost bite.

The household pet may be big or small, cobby or lean, long-haired or short-haired, kinky haired or straight-haired, or somewhere in between. They come in any color or combination of colors and patterns that Mother Nature can dream up. They can be bold or shy. They can be playful or regal. Some HHPs are uncomfortable in the show environment, and should be allowed to stay home where they are happier.

Because many Household Pets are rescued strays, anomalies that would not be allowed in the pedigree classes are accepted in HHPs. Blind cats, three-legged cats, earless cats and more are all accepted. The only requirement is that the cat is obviously well-cared for and content. In addition, adult HHPs are required to be altered. 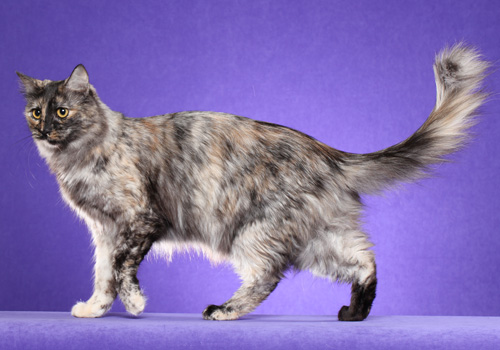