The Havana is a striking cat with a rich mahogany coat showcasing brilliantly green eyes. The short, smooth rich red-brown coat reveals the graceful lines of this elegant cat while the expressive green eyes glow with intelligence. Some believe it is named for its resemblance to the rich color of the Havana cigar, while others think the name came from Havana rabbit. These gentle cats are playful members of the family and always curious about everything that is happening in their home.

In the mid 1950s, Mrs. Elsie Quinn (Quinn) contacted Baroness Von Ullman and imported the first Havana cats to the USA to form the foundation for the Havana Brown breed in North America. Today, there is a significant difference between the English Havanas and those seen in TICA. The English cats are more oriental in type, following a development like other colors of Foreign (or Oriental) Shorthairs, with straight profiles, flared ears and wedge-shaped heads. In TICA and North American registries, the standard reflects the type of the foundation cats and preserves the original look with the upright ears, corn cob muzzle and angular profile lines. In 1983, TICA accepted the lilac Havana for championship competition and changed the breed name from Havana Brown to Havana.

The Havana is a curious, playful, people-oriented breed. They want lots of attention and return it with great affection. Expect a paw to reach out to engage your attention when you've been too busy to provide the attention the Havana thinks it deserves. That paw will also be used as the Havana investigates objects that engage its curiosity. This inquisitive, intelligent cat adapts to most situations and will come running to investigate a knock at the door or a crash in the kitchen. The richly colored Havana is an ideal companion if you're looking for an affectionate, intelligent cat who wants be part of everything you do.

The elegant Havana comes in two colors: rich mahogany red-brown and pinkish grey or lilac - with matching whiskers. Both colors provide a stunning setting for the brilliant green oval eyes sparkling with intelligence and mischief.

The richly colored, glossy coat covers a medium-sized, semi-foreign body that is heavier than expected. The body has a firm, lithe muscular structure that ripples under the lustrous brown coat with a sense of powerful grace. Males tend to be larger than the females, weighing from 8 to 10 pounds where females weigh from 6 to 8 pounds.

While the rich tobacco color of the Havana is what we first see, the head is also distinctive. The erect, forward-tilted ears convey a sense of alertness. The cat's profile is composed of a series of straight lines that accentuate the prominent stop. The muzzle is often described as having a corn-cob look or a rolled cigar shape. This unique look is created by a pinch at the muzzle and full whisker pads that combined with the square chin create blunt rounded look to the muzzle.

Kittens are born brown or lilac but may have ghost tabby markings that will disappear when the cat reaches adulthood. These active cats retain their kittenish playfulness throughout life and will be cherished companions if you choose to share your home with one. 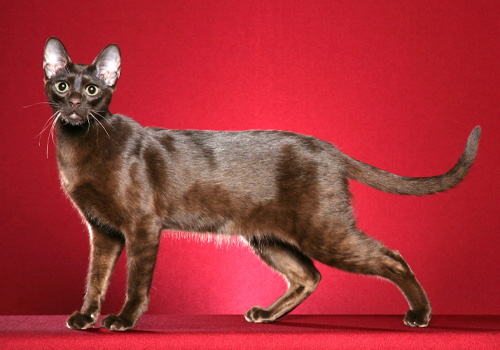