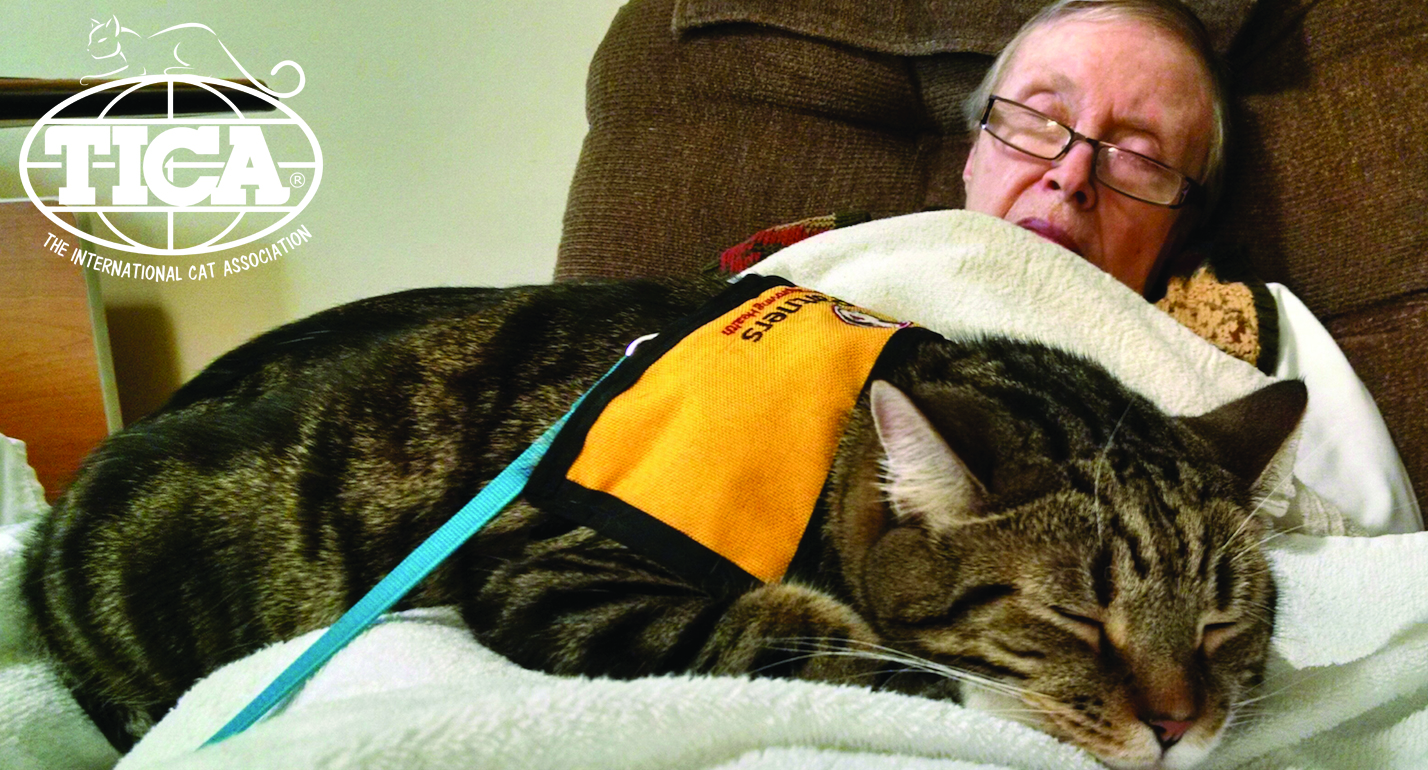 Numerous studies have shown that pets can lessen the symptoms of depression and help pet parents maintain a positive, optimistic outlook. A cat is good for your health because they can help reduce stress, lower blood pressure and promote the production of endorphins, which help you feel happy! 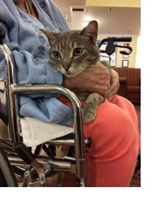 The purpose of the TICA Therapy Pet Program titles are to honor the cats and owners for the dedication required in performing as a therapy team. TICA is the first cat registry to give actual titles for these special cats and their owners.

Gwyneth, who lives in Pennsylvania, has had 6 cats through the years doing therapy work. Ranging from an Abyssinian with a set of wheels to several failed feral cats, her cats help share love and joy wherever they go. Gwyneth currently has 4 therapy cats involved in the TICA Therapy Cat Title Program.

Gwyneth Hayes is the owner of Bear, a purebred rescue American Bobtail, who began as a therapy cat with the American Red Cross in their Animal Assisted Therapy (AAT) program in 2009 and then transitioned to Caring Hearts Pet Therapy when the AAT program was dissolved in 2015. To get him used to all the handling and noise, he first began as a show cat in TICA and successfully became a Supreme. Bear enjoys quiet laps with his "ladies" at many of the homes we visit. He also does well with end of life transitioning.

Gwyneth's cat Chase, also an American Bobtail, first began showing in 2012. He was a therapy cat with the Red Cross when he turned a year old, long before he became a TICA Supreme. Chase also transitioned from the AAT program to Caring Hearts in 2015. He enjoys doing tricks, including showing the difference in his left and right paws, Shamoo, "kisses" and also taking a treat from my lips to name a few. He really enjoys doing tricks with younger people, especially those on the Autism Spectrum and at our local Ronald McDonald House.

Darius, also an American Bobtail, began his career in the show ring in 2014 and got his TICA Supreme days before his first birthday and received his title as a Caring Hearts Pet Therapy Volunteer on his birthday. Gwyneth says many of the kids at the Ronald McDonald House call him Big D or Fluffy. He is the proverbial favorite and everyone wants to take him home. Darius loves to love everyone and has no qualms who he visits as long as he is being loved on. He can do a few tricks, which makes the residents fawn all the more over him.

Phil is a non-pedigree Household Pet that came off the streets in 2015 at around the age of 1.5 years. He had suffered great trauma and was not supposed to be around to return to his colony. Fate brought him to Gwyneth and you would never guess that he had the rough start that he had. Phil is also missing his left hind leg. This breaks down many barriers with patients in rehab centers that have given up. Phil shares his zest and love for life with all that he meets. Phil is also a TICA Supreme and helps educate people on trap-neuter-return and love.

RW SGC Sarajen OliverUnderfoot of Maggismaines is a black silver Maine Coon owned by Margaret Sutherland of Georgia. Oliver is a therapy cat who seems to know exactly who needs attention and love.

This particular visit (pictured left) was breathtaking. Maggie sat in a chair with Oliver on her lap and asked this lady if she would like to pet him. As you can see, both of her hands were badly injured. She said, "Yes, but I don't know how I can?" At that moment, Oliver walked off of Maggie's lap and into hers and laid down.

Oliver uses his healing powers to help people feel better. He can assist in physical rehab by helping with manual dexterity. For example, it is much more appealing to pet or brush a pet using those muscles instead of squeezing a ball.

A huge thank you to Margaret Sutherland who presented the proposal for Therapy Cat Titles to TICA in 2013.

Click to download PDFs below in order to apply for confirmation of titles won as a Therapy Cat.