The International Cat Association (TICA) names Aline Noel-Garel Judge of the Year for 2009-2010 at its Annual Awards Banquet and Cat Show in Santa Clara, CA. 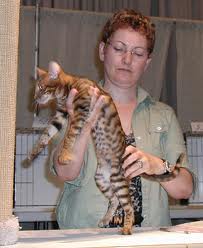 An Approved Allbreed judge from Quebec, Canada, Noel-Garel became a judge in 1988. She also is a Judge of Merit and an instructor for others in the judging program for Europe and South America. Prior to entering the judging program, Noel-Garel introduced the Sphynx as a new breed in the United States and was instrumental in getting the breed recognized as an approved championship breed that competes for titles and international and regional awards.

"Even before becoming a TICA judge, Noel-Garel has championed TICA," said Vickie Fisher, President of TICA. "There is no finer person that I would want to represent TICA around the world."

Since 1980, TICA's members have voted to name Judge of the Year in recognition of their hard work during the previous show season.

About The International Cat Association

Organized during 1979, The International Cat Association (TICA) is the world's largest genetic registry of pedigreed cats, largest registry of household pet cats and kittens, and one of the world's largest sanctioning bodies for cat shows. TICA currently recognizes more than 54 breeds of cats. No matter where you are, you’re in TICA’s world. A world of fabulous felines…fun...and friendships. To learn more about TICA visit http://www.tica.org